This is my story.

Rebecca Chen and Jenny Sun are both talented architectural designers from Smithgroup. Together, they designed a one-of-a-kind furniture set that is going to be auctioned off in order to raise funds for the AAPI community and uplift Asian arts in the aftermath of a history rise in anti-Asian crimes.

Design Concept: The main connecting piece of the set is a four fold painted screen found in an antique store. The front side is decorated with an imaginary landscape modelled with carved soapstone. Looking at its condition, the screen might date back to the 19th century when the style started gaining popularity in Asian home furnishing. Two panels from the folding screen are used for the seat of the bench, while the other two are used for the table top of the console. The black curved backs of the bench were originally parts of two high-back chairs found on the street.

Adding asymmetrical arc-shaped top rails brings the piece a contemporary look and feel. While the top rails are disconnected above the seat, the bottom rail is one singular piece which metaphorically symbolizes that “we are deeply connected in the same root”. The red paint does not only echo the color of the screen, but also enhances this metaphor ” We are different, we are the same” — Sesame Street. The clear front legs are almost invisible, therefore bring the red seat and back rails to the fore when you look at them.

Besides the table top, the console is inspired by two Chinese artifacts. One of them is the most important element in traditional Chinese architecture called “Dougong”, which is the complex structural element of interlocking brackets at one end of the table. The clear portion of the table top again allows the structure to be prominent from different angles. The other leg is inspired by the section of Chinese scroll in a square form. Its simplicity and lower position bring a harmonious balance with the sophisticated structure on the opposite side.

Fabrication Process: The bench was handcrafted locally by Scott Wynn Atelier, who has been designing and building furniture professionally since 1976. After the first visit to his workshop in San Francisco , Scott quickly agreed to volunteer his time on fabrication and came up with detailed shop drawings of the bench. His dedication eased the designers’ concerns and time to focus on the fabrication of the console. Due to the sophistication and available resources in hand, the designers used modern technology — 3D printing and laser cutting to fabricate pieces that comprise the interlocking structure portion of the console. The rest parts were handcrafted by the designers, Rebecca and Jenny, with the help from Rannie Xue who identifies herself as “a freelance DIYer who makes things with heart and hands”.

“Remembering Phoenixes”: This is a collection in remembrance of the 8 people who perished in Atlanta, 6 of whom were Asian women. The Phoenix is a mythological bird that represents rising out of the ashes, embracing the flames that were meant to take her down. The Phoenix is also the symbol of Atlanta, representing it’s rise out of the Civil War to become a world city. The spirit lives lost in the Atlanta shootings, lives on in the AAPI community, in America and in the world. Three Asian American women came together with support of allies including Scott Wynn Atelier & Smithgroup to dedicate this special collection. 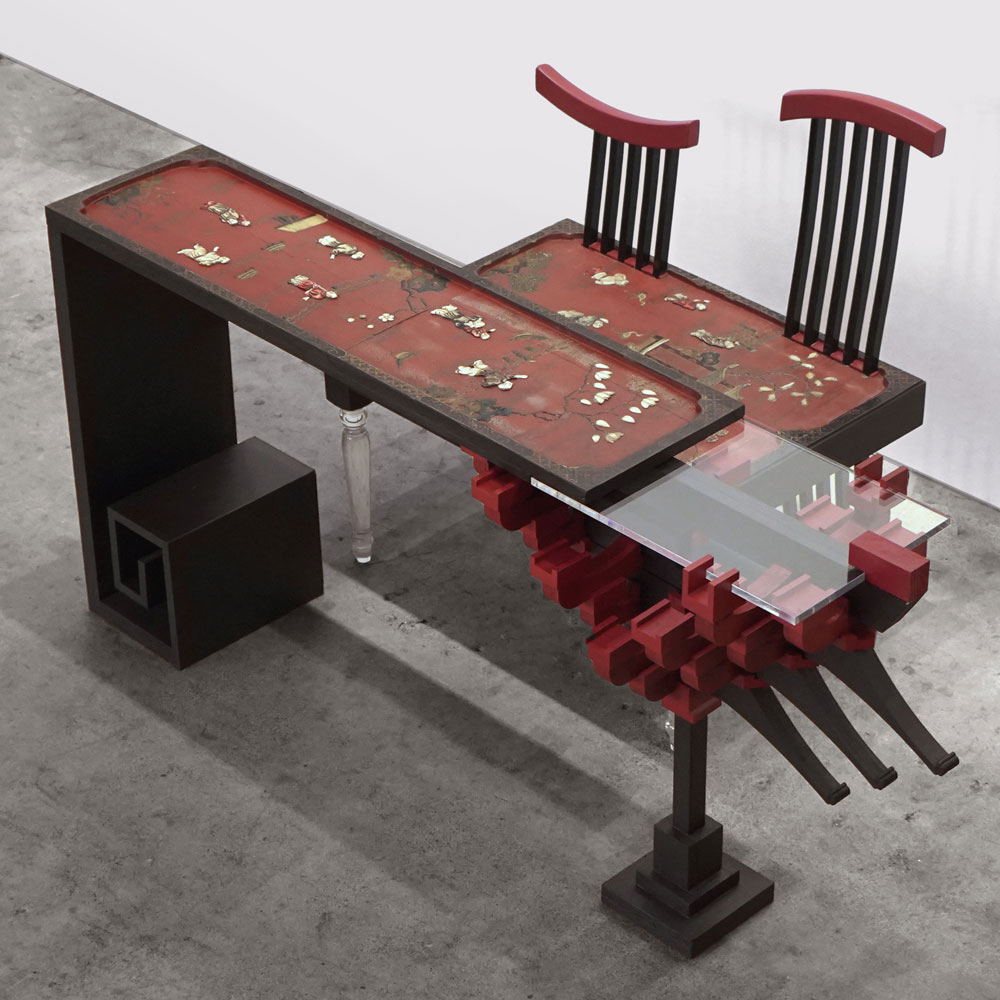 I was born at Smithgroup in San Francisco. I was listed for auction at Chairity, the annual event where creative volunteers auction off their designs in order to raise money for our community Chairity 2021 is being held November 4 at the San Francisco Design Center. Learn more at: www.givetwochairity.com
Add to my story

Watch our video to see what makes us special and why our furniture will never see a landfill.

Add to My Story​