This is my story.

Together, the Revel Architecture & Design and Millworks Solutions team designed and built this truly one-of-a-kind wine bar that is dripping with character. The design saw the transformation of an aviation “Tip Tank”, commonly used on small Beech Model aircrafts, into this wine-bar.

Inspired from a rocket perched on it’s launchpad this wine bar, dubbed “Rocket Fuel” has three spacious shelves which wrap the body of the tank and are reinforced using steel arms that stem from the back spine.

The spine does all the heavy lifting and suspends the tank above the ground using a large steel baseplate for stability. What we are left with is a functional piece of art with a unique story to tell.

History of the Tip Tank
What is a Tip Tank? Some aircraft designs feature fixed tip tanks mounted at the end of each wing. The weight of the tanks & fuel counteract wing bending loads, enhance overall stability, and lower landing speeds.

The Tip Tank used for “Rocket Fuel” features the origional data tag indicating the part number, serial number and manufacturer; Beryl D’Shannon Aviation Specialties. Research uncovered a certificate containing the part number, RB4-100, and a list of which aircraft it could be used for.

A call to the manufacturer also confirmed the age of the part (a hot young 40 something) which backs up the dates stated on the certificate.

The Design
Inspired by a recent project, and noticing a similarity in shape, the concept of creating a rocket was pitched. The idea was an instant hit, and we began exploring various ways the rocket would stand and what it’s function would become.

Original concepts saw us cutting into the tank itself but were quickly abandoned due to potential safety issues that could arise from sparks flying around old fuel cells (no premature rocket launches, please).

So, with all our limbs intact, we shifted focus on developing a shelving system that would wrap the tank and utilize the back cavity of the piece as the support which connects it to the ground and acts as an anchor of stability.

The Perfect Team
This is when Revel’s designers connected with the Millwork Solutions team. Their team provided indispensable skills, knowledge of materials, constructability, and creativity as we moved into the construction of Rocket Fuel.

The remaining materials used to build Rocket Fuel were objects looking for a new life from around the Millworks shop. FSC certified wood create the three shelves while recycled steel parts from an old shop machine make the base and spine. By utilizing materials already on hand the design added just the cost of paint to the original $100 spent on the Tip Tank which had been acquired via Craiglist.

The Final Design
Rocket Fuel is both playful & functional and has a story unmatched by any other. And because 100% of the material used was scrap from various locations and dark corners of wood shops and airplane hangars, it’s safe to say this Rocket has more than just one story to tell.

We could go on and on about how much fun we had building it, or how much character it is going to bring to the space as it stands tall through it’s next iteration in life, but if you’ve scanned this tag, you can see for yourself the fun and creativity that went into creating Rocket Fuel. 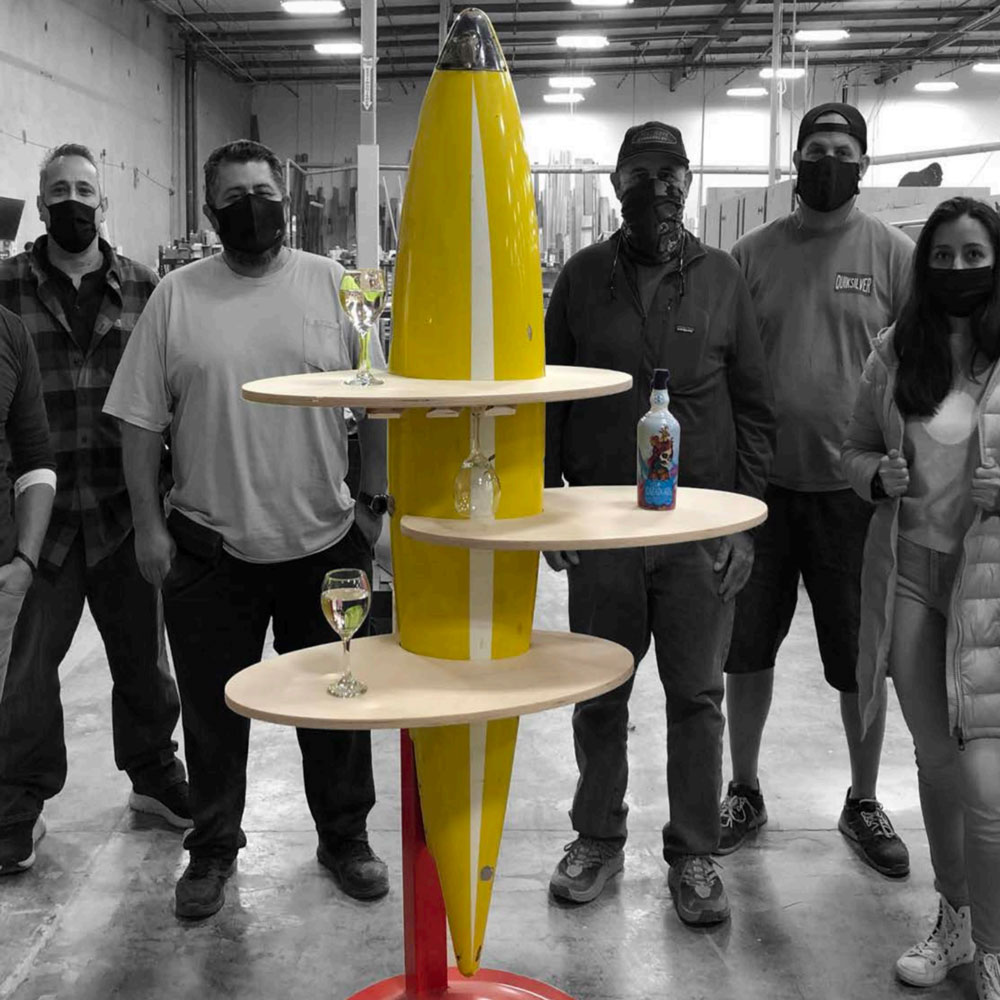 I was born at Revel Architecture & Design and Millworks Solutions in San Francisco, CA. I was listed for auction at Chairity, the annual event where creative volunteers auction off their designs in order to raise money for our community Chairity 2021 is being held November 4 at the San Francisco Design Center. Learn more at: www.givetwochairity.com
Add to my story

Watch our video to see what makes us special and why our furniture will never see a landfill.

Add to My Story​